Sean has subtly reminded me that I intended to contribute to this forum, so here I am. I must admit to a degre of nervousness; when I compare myself to the excellent arborists out there I don't feel like I've much to contribute. Perhaps I should be comparing them to some of the awesome veteran trees around the place to get a sense of perspective.

In any case, during my travels I came across a fantastic Eucalyptus camaldulensis, next to Oibell Drive and the historic railway bridge in Gundagai. As seems frequently to be the case, the tree does not look so large and impressive on Google Earth images as some other - evidently younger - trees, but up close it is truly awesome. 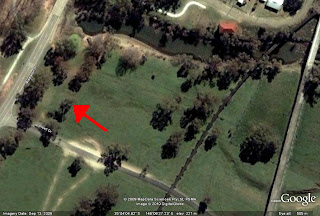 As you can see, the canopy of the veteran (indicated by red arrow) is not as broad as some of the other local trees. It does however have significant features of veteranisation, including previous loss of apical stem, canopy senescence, and substantial hollowing.

I couldn't begin to give an accurate assessment of the tree age, and I'd be guessing if I said it was probably at least as old as the nearby railway bridge (also visible in the google shot), which was built in 1902.

I'd be interested if anyone happens to have old photos that might feature this tree - or indeed the location without the tree - in order to provide a more accurate age range. I've contacted to Gundagai library for some more leads. In the mean time, here are some pictures of the tree up close. 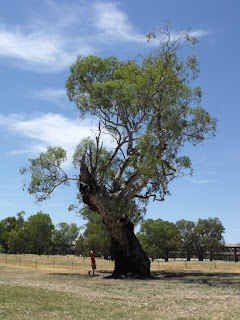 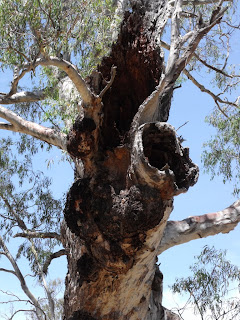 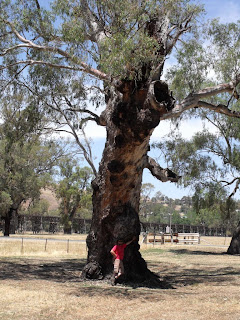 Another classic Queensland Veteran Tree is the Curtain Fig west of Yungaburra on the Atherton Tablelands. 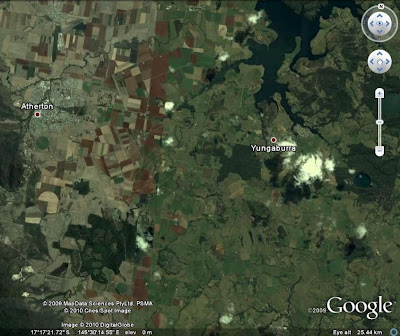 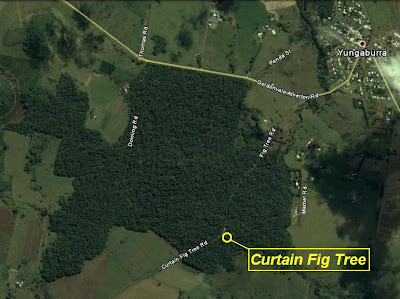 It really is quite incredible to think that until last year 2009 the Curtain Fig Tree was not listed on the Queensland Heritage Register....Whilst there is no doubt that this tree has been afforded protection due to the fact it has been a tourist magnet ever since the first European stumbled across it and raved on about it to their friends (probably over a drink or two!)...and it is inside a gazetted National Park (Curtain Fig NP).

However the slow progress towards officially recording and recognising the significance of many (a great many!) of the natural wonders across our state is frustrating to a great many people.

Each one of us can assist in the task of preserving our own local natural heritage for future generations to enjoy. The Veteran Tree Group is just one of a number of organisations that are working towards similar aims.

Over the years resources have been committed to protecting the forest environment that would otherwise have been overwhelmed by the pressure of the number of visitors walking through this parcel of remnant Mabi Forest. 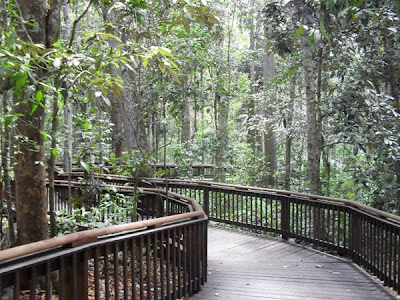 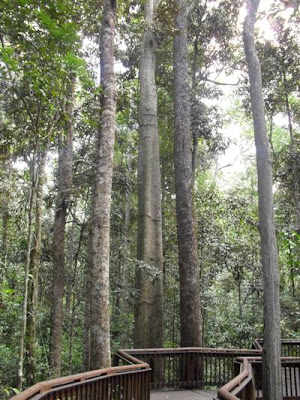 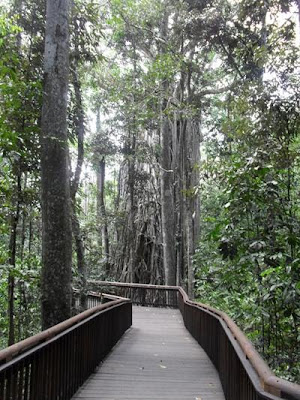 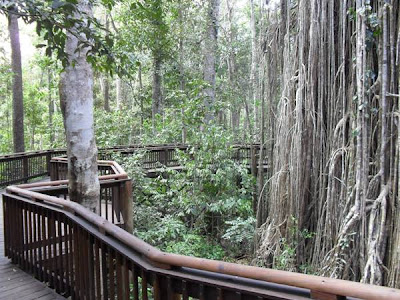 This large strangler fig and its long dead host tree have both fallen into an adjacent tree creating through the growth of aerial roots reaching towards the ground, a complex sheet of fig roots that resemble a frozen waterfall more than a curtain in my opinion. 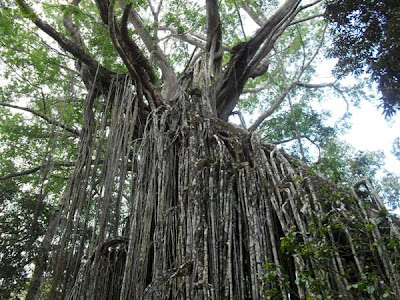 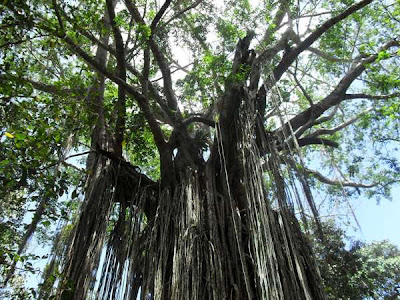 Whether it looks like a curtain or a frozen waterfall (a curtain of water perhaps is what they meant?) there is no question that of all the many tree species you might encounter in Queensland on your travels veteran fig trees often have th emost mind blowing architecture to both their limbs and roots.

I personally don't really have favourites as such (though I am certain to have made mention of this or that tree as being my favourite!)...it would be hard to try and make comparisons between tree species that can be so very very different in their morphology...however when you look at a veteran tree (really an ancient tree!) like the Curtain Fig it certainly has a strong case for being included in the top ten. 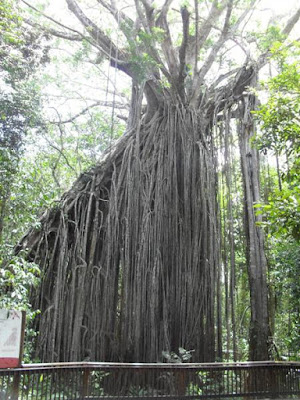 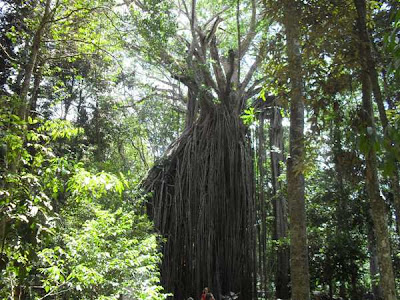 Posted by Sean Freeman at 11:22 AM No comments: Links to this post

As part of my recent flying trip to Far North Queensland (FNQ) I met a couple of Bull Kauri Pines ~ Agathis microstachya at the edge of Lake Barrine on the Atherton Tablelands. 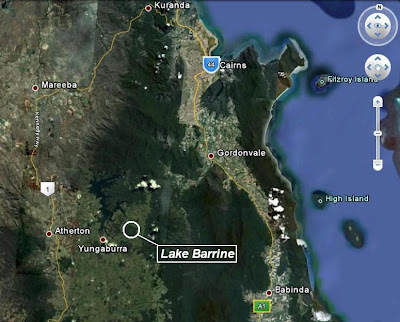 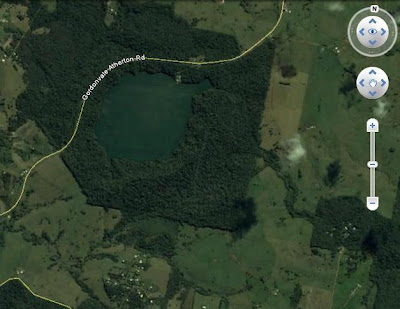 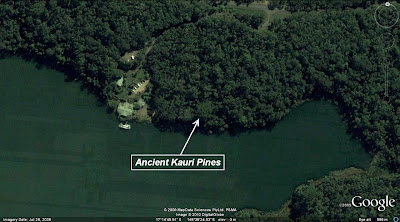 Now it is always hard to evaluate claims about the age of a particular tree, however in the case of these two Kauris there is some substantial supportive evidence in a number of logs removed from the forest in 2006. The logs were of the same species and very similar diameter to the standing pair on the lakes edge.

Right click this link and open as a new window to view some pictures of the logs and an information plaque. National Register of Big Trees

Whilst it was difficult to view the compararive heights and spread of the canopies of these Kauris relative to the adjacent forest, the substantial difference in grith throughout the lower stems makes a huge impression on anyone standing next to them. 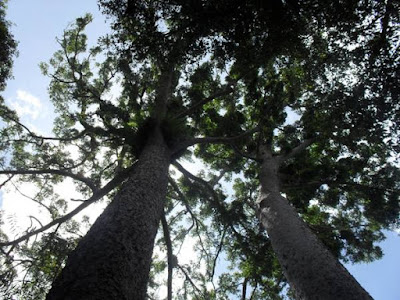 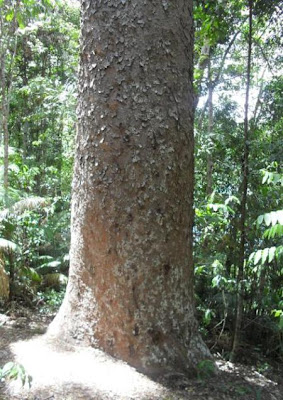 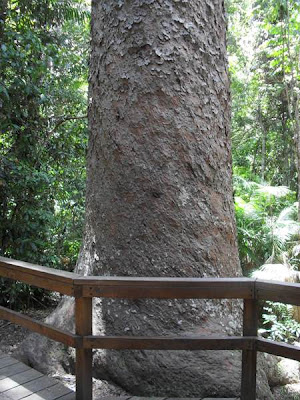 Although the Bull Kauris are not included in the lists that have been put together for the canopy tree of the pre-1800's Mabi Forest that covered large tracts of the Tablelands before the widespread clearing associated with white settlement. Their sheer size and grandeur makes it perfectly obvious to anyone standing under them, why the traditional Aboriginal custodians of this part of Queensland placed so much importance on the forests here.

Mabi Forest is a type of rainforest that occurs in North Queensland. It is found in small patches on the Atherton Tablelands, between the towns of Atherton, Kairi, Yungaburra and Malanda, with a remnant patch also located at Shiptons Flat, near Cooktown. Mabi Forest is otherwise known as Complex Notophyll Vine Forest 5b and includes the Queensland Regional Ecosystem 7.8.3.

Mabi Forest grows on highly fertile basalt-derived soils, and is characterised by an uneven canopy (25–45m) with many tree layers, scattered deciduous and semi-evergreen trees, and a dense shrub and vine layer. The dense shrub layer distinguishes Mabi Forest from similar rainforests, and provides important habitat for up to 114 bird species.

A variety of plants and animals make their homes in Mabi Forest, including the nationally threatened Large-eared Horseshoe Bat and Spectacled Flying-fox. Other species, such as the Musky Ratkangaroo and the nationally endangered Southern Cassowary, used to occur in Mabi Forest. However, the remaining patches of Mabi Forest are too small for these animals to survive in, and so the Musky Rat-kangaroo and Southern Cassowary have become locally extinct


Mabi Forest has been listed as a critically endangered ecological community under the Commonwealth Environment Protection and Biodiversity Conservation Act 1999 (EPBC Act). Mabi Forest was listed due to its restricted distribution and vulnerability to ongoing threats. There is only 1050 ha of Mabi Forest left, and this occurs as a series of small, isolated patches. Many of the remnant patches of Mabi Forest are being invaded by exotic smothering vines, and feral and domestic animals. The use of remnant patches of Mabi Forest by stock can impact on this ecological community through trampling, grazing and soil compaction.

National listing of Mabi Forest recognises that its long-term survival is under threat. The purpose of the listing is to prevent its further decline, and assist community efforts toward its recovery.

(Quote from Department of the Environment and Heritage, April 2004) 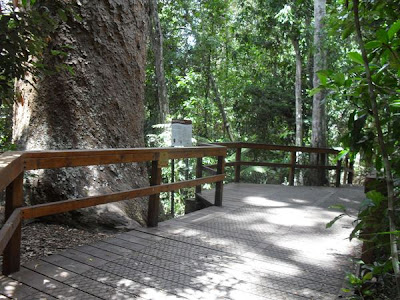 The raised boardwalk next to the two trees is providing good protection to their roots and the soil environment, in fact the forest on this side of the lake appeared to have very good age diversity and a complexity of habitat indicating good ecological health and stability. 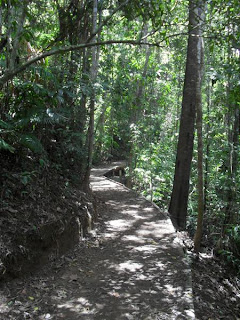 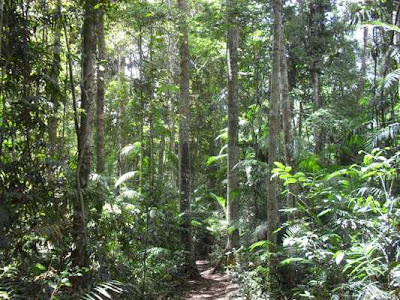 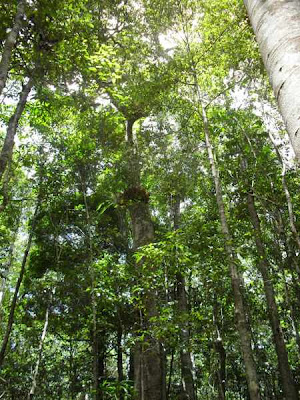 Posted by Sean Freeman at 8:24 AM 2 comments: Links to this post